DAMAGE CONTROL: A recent ballot challenge hearing in New Jersey exposes a desperate strategy by Obama to distance himself from his forged certificate and induce the contrived value of his transient political popularity as the only “legitimate qualification” needed to hold the office of the presidency.

Commentary by Dan Crosby
of THE DAILY PEN

NEW YORK, NY – After a Maricopa County law enforcement agency conducted a six-month forensic examination which determined that the image of Obama’s alleged 1961 Certificate of Live Birth posted to a government website in April, 2011 is a digital fabrication and that it did not originate from a genuine paper document, arguments from an Obama eligibility lawyer during a recent New Jersey ballot challenge hearing reveals the image was not only a fabrication, but that it was likely part of a contrived plot by counterfeiters to endow Obama with mere political support while simultaneously making the image intentionally appear absurd and, therefore, invalid as evidence toward proving Obama’s ineligibility in a court of law.

Obama’s lawyer, Alexandra Hill, agreed with arguments that the image of Obama’s birth certificate was a forgery and made the absurd claim that, therefore, it cannot be used as evidence to confirm his lack of natural born citizenship status. Therefore, she argued, it is “irrelevant to his placement on the ballot”. 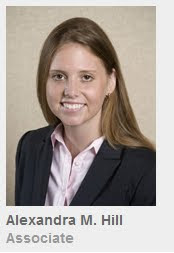 Hill went on to contort reasoning by implying that Obama needs only invoke his political popularity, not legal qualifications, in order to be a candidate.

During the hearing, Hill's concession was showcased by the following exchange:

Judge Masin asked Hill, “I understand you have a general objection before we get to the question of what is his (Obama’s) qualifications?”

“Yes, I have an objection as to relevance,” replied Hill, as to the plaintiffs’ witness testimony regarding the authenticity of the image of Obama’s alleged 1961 'Certificate of Live Birth'.

Hill then attempted to have the judge declare that Obama was preeminently eligible without any legal responsibility to prove with documentation that he was, in fact, qualified to hold the office of the presidency.

“The objectors carry the burden of proof to show that a candidate is not eligible under New Jersey statutes,” Hill said.

Hill’s misunderstanding of administrative law reveals a strategy to defend Obama’s fraudulent election in which our legal system has reversed the legal assignment of burden of proof in order to equate eligibility with a legal definition of innocence of a crime for Obama.

Unfortunately for Obama, eligibility for political office does not fall under the precepts of criminalogical reasoning of "innocent until proven guilty", unless a charge is made that a crime has been committed, such as forgery or fraud, in order to deceive people about your identity or citizenship status. Obama's ineligibility, by itself, is not a crime...being fraudulently elected by deceiving voters is.

Hill incorrectly argued that Obama is automatically eligible until proven ineligible, yet she sought to suppress the very evidence which shows that Obama’s eligibility has never actually been proven to begin with.

In doing so, Hill stated, “Photographs (of Obama’s alleged birth certificate) are not relevant as to the discussion of the law today.”

Then, shockingly, Hill went on to agree with widely publicized suspicions that the image of Obama’s alleged Certificate of Live Birth is, indeed, a fabrication. She conceding that the plaintiffs’ arguments against the authenticity of Obama’s birth certificate were valid saying, “I understand that they have great arguments (that the internet image of Obama’s birth certificate is a forgery), but I don’t see how that is relevant in this case.”

Absurdly, Obama’s position, as contorted by Hill, is that his appearance on New Jersey's presidential ballot is not related to his actual eligibility to be president.

As Obama’s legal argument becomes more contorted, he is being forced to survive in an ever shrinking legal space, under an ever increasing weight, of his failure to meet constitutional eligibility requirements. 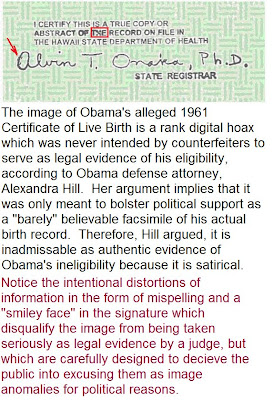 Hill, of Genova, Burn & Giantomasi Attorneys in Newark, made a desperate motion to dismiss the ballot objection arguing that Obama’s lack of natural-born citizenship status was not relevant to being placed on the New Jersey presidential ballot because no law exists in New Jersey which says that a candidate’s appearance on the ballot must be supported by evidence of natural born citizenship status. Only the U.S. constitution restricts eligibility to hold the office of president to natural born citizens.

Judge Masin denied the motion to dismiss and the case proceeded to trial. 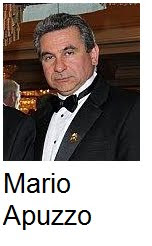 “Sadly, regardless of her moral deficiency, Hill is legally justified,” says TDP Editor, Penbrook Johannson, “Obama's eligibility is a separate matter than the charges of forgery and fraud. Of course, we have evidence that he is not eligible. But, evidence of forgery by as yet unidentified counterfeiters working on behalf of Obama is not what legally excludes Obama from appearing on a ballot, by itself, until some authority is willing to consider this as evidence of forgery on its merit as an indication of actual ineligibility in a court of legal authority. Until some court of competent jurisdiction is willing to hear evidence of forgery and fraud, you can’t legally punish a political candidate for that crime which has not been proven that they committed. However, since Obama is not eligible because of a lack of authenticated evidence to the contrary, he could be held off the ballot for that reason.”

According to Johannson, there is an overwhelming level of moral certainty that Obama is a usurper, but until a court with jurisdiction considers this case, Obama’s status as a legitimate president is in limbo.

"He does not exist as a president except in the imagination of those who blindly support him. Whereas he is politically desired by a transient consensus, his legality is unresolved until a responsible court makes a determination. This is the essence of our crisis. Our nation exists in a state of non-authorized identity. Obama is just some guy calling himself a president and living in the White House without the confirmative authority to do so."

Obama’s document forgery and fraudulent presidency have now forced him to flee to a “strange twilight zone” between political popularity and legal legitimacy where poorly counterfeited records are apparently allowed to be published by Obama using government media resources for political purposes, yet those same records are held by the courts as irrelevant for determining Obama’s legal eligibility status because they are, according to judges, “so poorly forged” they are obviously meant to be satirical and not to be taken seriously as evidence.

Shockingly, parting from widespread public ignorance, Hill actually acknowledged two of the three necessary components of determining natural born citizenship as being place of birth and citizenship status of both parents. However, she argued that, “No law in New Jersey obligated him (Obama) to produce any such evidence in order to get on the primary ballot.”

The third component of natural born eligibility is maintenance of natural born citizenship status from birth to election without interruption, involuntarily or voluntarily, due to expatriation, extradition, renouncement or foreign adoption.

“Obama is mocking our constitution,” says Johannson, “His position is that he never claimed the image was an indication of his natural born status, just that it was information about his birth. Whether it is forged or authentic is irrelevant to Obama because plausible deniability affords him the security in knowing that no legal authority is willing to hang him with it.”

Of course, Johannson adds that it makes Obama look like a willing accomplice and a liar, but, he says, “…show me a politician who cares about being seen as a liar by the public. If people who support him want to vote for a person like that, it reveals more about the reprobate character of Obama supporters than competency of any legal determination about his lack of constitutional eligibility. Degenerates will vote for a degenerate while patriots will exhaust all civil means to remove him…until those civil means are exhausted. Then things get ugly for government.”

“However, Hill is also essentially admitting that Obama is not a legitimate president and that Obama believes that his illegitimacy does not matter to his legal ability to hold the office. Obama holds to a political tenet, not a legal one with respect to his views on his eligibility. That’s what corrupt, criminal politicians do. When the law convicts them, they run to public favorability for shelter with the hope that their supporters will apply pressure to disregard law in their case.”

Obama is now arguing that because he is politically popular, as he points to as being indicated by his so-called ‘election’, despite accusations of eligibility fraud and election fraud, the constitutional eligibility mandate is not relevant, in his view. Until a courageous authority is willing to disagree and hold Obama to an equally weighted legal standard, civil remedies for the Obama problem are limited.

Johannson adds that Obama is making the same argument on behalf of Obamacare.

“If he had the gall to actually tell the Supreme Court that they have no authority to determine the unconstitutionality of his illegitimate policies, what makes anyone think he believes they have the authority to disqualify him due to his lack of constitutional eligibility? Obama believes he holds preeminent power over all branches of government because of his delusions of political grandeur.”

He correctly points to a lifetime pattern of behavior and testimony by Obama which indicates a complete lack of regard for the U.S. Constitution when it restricts Obama’s political agenda and lust for power.

“This is a guy who illegally defaced public property when he scribed his aspirations to be ‘king’ in a concrete sidewalk at the age of ten, for God’s sake. Now, his ‘majesty’ wants to put his illegal ‘graffiti’ into American law books. However, his problem is that he has to face the fact that he is an abject failure in his capacity to meet any standard required by the 250-year-old U.S. Constitution, in everything he tries to do. The Constitution owns him and he can’t stand it. He hates it. Therefore, instead of admitting his lack of constitutionality, he simply breaks the rules and proceeds to illegally scribe his fake authority on everything until someone is willing to physically stop him. Obama is not just an illegitimate politician, he is a rogue outlaw without regard for the divine providence of American law.”

Apuzzo submitted that New Jersey law requires Obama to show evidence that he is qualified for the office he wishes to occupy and that includes showing that he is a “natural born Citizen,” which includes presenting evidence of who he is, where he was born, and that he was born to two U.S. citizen parents. Apuzzo added that the Secretary of State has a constitutional obligation not to place any ineligible candidates on the election ballot.

The account of the trial can be read at:

http://www.teapartytribune.com/2012/04/11/nj-ballot-access-challenge-hearing-update/
Posted by Penbrook One at 11:13 AM