Was Obama’s Mother A Bigamist?

by Pen Johannson
New York - Documents released and posted on the Scribd.com website, show that Barack Obama’s mother, Ann Dunham, applied for a passport in 1981 and specified a date of her marriage to Lolo Soetoro as being March 5, 1964 which is 15 days before receiving a Decree of Divorce along with an Award of Custody of Obama Jr., from Barack Obama, Sr. on March 20th, 1964. 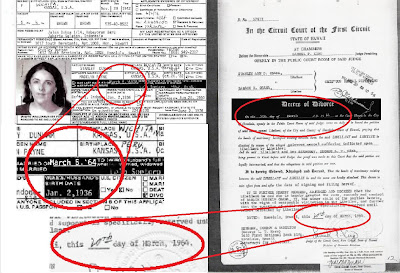 As reported on August 1, 2010, by Dr. Jerome Corsi of World Net Daily, the State Department released the documents on July 29, 2010, responding to a request submitted by Christopher Strunk, a New York resident who has actively pursued obtaining documents regarding Barack Obama's birth and his eligibility to be president under the "natural born citizen" requirement of Section 1, Article Two of the United States Constitution.
Corsi also reports that Ann Dunham’s passport applications show that she applied for and received three separate passports and a renewal between 1965 and 1981. However, in yet another example of convenient government complicity to “inadvertently” obscure Obama’s actual past, the Hillary Clinton-led State Department claims that a “General Services Administration” directive in the 1980s resulted in the destruction of passport applications and other "non-vital" passport records, including Dunham's 1965 passport application and any other passports she may have applied for, or held, prior to 1965. The released records also document that on Aug. 13, 1968, Ann Dunham applied to have her 1965-issued passport renewed for two years, until July 18, 1970.

Theoretically, if we use the "three years-plus-two year renewal" time model for any previous application, going back from July 18, 1970, Dunham could have applied for and received an original passport between August, 1960 when she allegedly met Obama Sr., and July 18, 1961, two weeks before giving birth to Obama.

Dunham’s 1965 passport application is missing despite a statement on the State Department’s website stating that the U.S. Passport Services Office maintains U.S. passport records from 1925 to the present.

The documents also reveal yet another possible name used to identify Barack Barry Hussein Obama Soetoro. According to the application for Dunham’s 1976 passport she uses the parenthetical name of (saebarkah), or perhaps “Subarkah”, which is a surname commonly found among Indonesian citizenry.

The existence of records of a passport or travel documents prior to 1965 would reveal information on Dunham’s travel and whereabouts when Obama was born and possibly reveal the location of Obama’s birth. Therefore, we can now add Ann Dunham’s official whereabouts to the litany of records and documents now missing from Obama’s biographical history.