Abercrombie Gets Bailed Out By Hawaiian Attorney General

Editorial by Danny Crosby
of The Daily Pen

Honolulu, HI – Please excuse the laughter you hear from the gallery, but we told you so. Welcome to the party, Neil. It took you a while to come around, but we’re happy to have you on board.
. 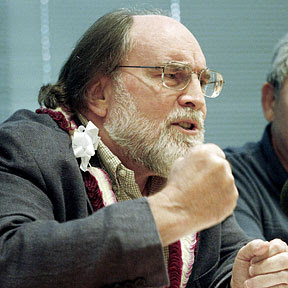 It appears that Hawaiian Governor Neil Abercrombie will be forced to conclude his chivalrous expedition to prove Barack Obama was born in Hawaii, after all. The new governor may not have been born yesterday, but he chose to take the obstinate route to this destination, and alas, merely finds himself among the other millions of American underlings who have already traveled the same "Obama Eligibility" road. All that outrage and "offendedness" only to realize it all ends at the office of the Hawaiian attorney general.

It’s too bad, too. We thought he actually had a chance at redeeming Obama's mum and dad...Not!

Calling Abercrombie a "fool" is too harsh. However, let’s just say he’s politically selective in the application of his intelligence. If there were a way to capture Abercrombie's futility in a 17 second video, his weak attempt to expose Obama's epic lie, (...er..uh..truth), might be featured on YouTube's "Fail" channel among the roster of hilarious, but painful, clips.
.
Let this be a lesson to the rest of you governors and congressional simpletons. Obama's grandeur shall remain divinely hidden, and there is nothing you can do about it. Who do you think you are, anyway? The government?

Abercrombie's failure to find the grail of Obama's opulence just proves that allowing one's self to be blinded by ideology for too long will only result in flights of self-righteous indignity. Under the guise of defending the honor of Obama's dead kin, Abercrombie tinkered his way into Obama’s Wonderland of illegitimacy, either by design or audacity, and has found the same things 'behind the looking glass' that the rest of America found out five years ago. He found the smiling Cheshire Popoki holding the book of Hawaii’s remote and ridiculous legal statutes.

"Well, get in line, Neil!" says Marian Taylor of TMB Media Research, "There are about 50 million other people who have been bird-dogging this crime long before Abercrombie took over in dreamland last month."

Taylor, a veteran of the Obama eligibility saga since 2007 says the tragic consequences of Obama's deception are reflected by Abercrombie's example in futility.

"America has slowly become the laughing stock of global politics because their president walks around 'illegitimately naked' while his delusional supporters applaud him as though he were wearing the 'costume of eligibility'," quipped Taylor, "...and the obtuse media, the lawyers, the judges and congress say nothing, know nothing and do nothing. It's quite pathetic."
.
Hawaii A.G. David Louie told the governor he "...was not legally permitted to disclose information from vital records without the person’s consent," Abercrombie spokeswoman Donalyn Dela Cruz said.
.
Not surprisingly, Dela Cruz continued, "There's nothing more that Governor Abercrombie can do within the law to produce Obama's document. Unfortunately, there are conspirators who will continue to question the citizenship of our president."

Perhaps the Governor of Hawaii will fancy some questions of his own about Obama's citizenship now, as well.

Abercrombie claims he was friends with Obama’s parents and alleges that he knew Obama as a child despite the fact that Obama and his mother, Ann Dunham, were living in Washington while Dunham attended extension classes at the University of Washington, just weeks after Obama’s birth.

Abercrombie launched his milquetoast effort in December, 2010 seeking a way to address what he referred to as “conspiracy theories” that the president was not born in Hawaii. The governor said at the time he was offended by people who questioned Obama’s birthplace and that he felt the office of the president deserved more respect than it was being given by doubters of Obama’s eligibility.
.
Ironically, Abercrombie did not express whether the possibility of the office of the President being usurped by an illegitimate candidate was offensive to him. Now, perhaps the governor has a better reason to be offended after being prohibited from obtaining his "friend's" natal records by the most absurd municipal legalisms on the planet.

Serious researchers of this subject, those who have been engaged for more than four years, simply scoffed at Abercrombie's fake outrage. They knew where his endeavor would end, and they were right. It ends with the bizarre rules in the court of the "Ali'i wahini of Hearts".

Apparently, upon taking office last month, Abercrombie did not get the world-wide memo containing the following information about Obama’s covert identity:

Item 1 - Hawaii revised statute HRS 338-18 prohibits the release of a certified birth certificate to anyone who doesn’t have “a tangible interest.” Yet, HRS 338-17.8 also obligates the Hawaiian Health Department to issue a birth certificate to foreign-born children when the parents claim Hawaii as their residence within a year prior to the birth, regardless of the location of the birth.

Item 2 - Those doubting Obama’s eligibility to be president correctly maintain that Obama has never provided his original, 1961, hospital generated, NVSD template of a “Certificate of Live Birth” containing the signature of the attending physician and the name of the hospital. This is true. Obama has not provided public access to this document.

Item 3 - Hawaii’s former health director, Chiyome Fukino, already stated in two separate press releases, the first on October 31, 2008 and again in July, 2009, that she had personally seen and verified Obama’s original vital records. However, Fukino would not elaborate on the content or titles of the documents she had seen leaving open the chronic obscurity of Obama’s natal metrics. Perhaps Abercrombie should give Fukino a call in his search for the authenticate documentation.

Item 4 - Neophytes more ignorant than the governor love to cite two birth notices in two Honolulu newspapers as proof of Obama's Hawaiian birth. However, it has since been proven that the papers in 1961 published birth information provided directly by the Department of Health’s birth registration list which does not consider the location of birth when they are recorded under the foreign birth provisions of HRS 338-17.8. The announcements do not state the name of the hospital, the name of the child or the time of the birth. They also disregard the actual marital status and address of the parents.

Adding to the discouragement of Obama supporters lusting to endow a newspaper with Presidential eminence, birth announcements found in a remote Island’s newspapers and scanned into a grainy image on the internet, unfortunately, do not afford a prolific candidate with legal qualifications to serve as President under the provisions of the U.S. Constitution. Sorry. That task of vetting that position relies on sources somewhat more authoritative with access to personal and professional information about the candidate.

Health Department spokeswoman Janice Okubo again droned Friday that Obama’s name exists within the office of Vital Records’ alphabetical list of people alleged to be born locally. This list is already well known by many and is maintained in bound copies available for public view. However, these names are generated based on birth registration office location, not confirmation of actual birthplace. The list is not helpful in clarifying any detailed natal information pertaining to Obama's eligibility to be president.

This, likely, is the list Abercrombie referred to in his interview with the Star Advertiser last Friday. This information, called index data or a “birth registration list”, shows a listing for "Obama II, Barack Hussein, Male," according to the department’s website. The information does not contain details of the vital records filed. The president was allegedly born Aug. 4, 1961.

"The index is just to say who has their records within the department. That’s an indication," Okubo repeated. "I can’t talk about anyone’s records."

Okubo's statement further confirms what the rest of us already know...that natal records within the Hawaiian Health Department are not only for births in Hawaii.

It has been stated many times by liberal, pro-Obama media sources that the Obama campaign issued a Hawaiian “Certification of Live Birth” in June, 2008. They desperately lobby for this document’s officiousness stating that since it comes sanctioned by a state municipality and shows Obama's birth date, registration location and brief parental information, it is somehow enough to declare Obama’s legitimacy as President in their minds. Of course, this is ridiculous.

On the bright side, Abercrombie did something the rest of America was not able to do. He brought to light the fact that Barack Obama’s documented history remains as dark and secret as much to the highest executive authorities in America as it does to the common citizen. Abercrombie understands the problem now. With the help of abettors, Obama has become legally untouchable.

Now that Obama's recorded past has evaded even the executive authority of his own alleged native state, perhaps Congress and the U.S. media can be made fools of next. Oh, wait...they already have been.

Unfortunately, Hawaii’s Attorney General cannot save Abercrombie from the ultimate damage his little month-long excursion will cause, though. Abercrombie is right about one thing. It will have massive ramifications on the 2012 election which will devastate Obama's re-election bid and damage further the quivering democrat party. Not to mention, Abercrombie will now suffer the personal attrition of an internal war between his leftist political loyalties and his newfound moral doubts about supporting someone who has become the most prolific liar and political deceiver in American political history.

To paraphrase words of a bizarre fairy tale's heroine, "You are nothing but a pack of cards!"

Hey, Neil…we don’t mean to “offend”, but with friends like that, who needs enemies?