Former Hawaiian Senior Elections Clerk, Tim Adams, Provides Sworn Affidavit Indicating Obama was Not Born In Hawaii - And Joins Hawaiian Governor and Former DPH Chairman, Brian Schatz, As List of Eyewitnesses To Shocking Roster of Mounting Evidence Against Obama Grows
by Penbrook Johannson
Editor, The Daily Pen
.
Honolulu, Hawaii – Eventually, the conflagration of mounting evidence will reach critical mass and command the attention of the American judicial and legislative authorities…one way or another. Then Obama will have a choice to continue perpetuating his covert identity, or fulfill his own standards of "transparency" with the American people.
.
Obama cannot run from his dark past forever.

Former senior elections clerk, Tim Adams, became the third of current or former Hawaiian officials bearing intimate knowledge about Obama's natal documentation to formally indicate that the Aloha State does not possess an original, 1961 birth certificate documenting the natural-born citizenship of Barack Obama. Adams says Obama was definitely not born in Hawaii, but he does not know where else Obama might have been born because there is no original documentation showing his attested birthplace.

Recall, two weeks ago, in a January 13th interview with the Star Advertiser, current Hawaiian governor, Neil Abercrombie also indicated that his month-long search for Obama’s original bona fides among the municipal throngs strongly suggested that there is no original documentation for Obama’s birth held on file by the state of Hawaii, except for an archive of an alleged registration notation issued by the registrar in 1961. Hawaii’s communications officer, Janice Okubo, confirmed Abercrombie’s statement by saying that the Registrar's Office maintains a public collection of birth registrations and Obama’s name appears in them. However, it has long since been proven that Hawaii’s birth registration process includes foreign births when the parents claim a Hawaiian residence. A record of registration is not necessarily an indication of a Hawaiian birth under the provisions of HRS 338-17.7 and 17.8.

Also, previously, in August of 2008, the former Democrat Party of Hawaii’s chairman, Brian Schatz, who now serves as Hawaii’s lieutenant governor, then refused to certify Obama’s constitutional eligibility for submission to the Hawaiian Elections Office for inclusion on the 2008 Hawaiian presidential ballot because he was either not able to locate originally documented proof that Obama is constitutionally eligible to serve as president, or he was provided with an original record of Obama’s birth which confirmatively proves he is not eligible to be president.

If Obama’s records actually existed within the state of Hawaii, Schatz, as the head of the Democrat party’s authority in Hawaii and personal supporter of Obama, would have requested access to them. The "Identity Protection Law", HRS 338-18, often cited by Hawaiian officials as justification for denying access to Obama's records would not apply in a request from Schatz because the law states that a request for someone's vital records must be for tangible reasons. It was Schatz' duty to vet Obama's elibility for the office of the presidency. This is a "tangible reason". Therefore, the Hawaiian Department of Health would have released Obama's birth records to Schatz if they existed. The fact that Schatz refused to certify Obama's eligibility proves the records do not exist.
.
Using the information in any original records, Schatz would have assessed Obama’s constitutional eligibility and, therefore, if upon confirming that Obama was a Natural-born citizen, would have authorized an Official Certification of Nomination (OCON) which would have included the explicit language required by HRS 11-113(c)(1)(B) thereby enabling the Hawaiian Chief Elections Officer, Kevin Cronin, to approve Obama’s placement on the Hawaiian ballot. However, Schatz did not do this.

Then, scandalously, one day after Schatz filed the DPH’s non-certification, the Democrat National Committee (DNC), chaired by Nancy Pelosi, issued a fraudulent Certification stating that Obama was constitutionally eligible to serve as president, even though the DNC had no original documented evidence to support such a claim.

On January 20th, 2010, Adams signed a sworn affidavit which reasserts testimony he gave in an interview with WLRM radio’s James Edwards, in early June of 2010, when he first publicly said that the state of Hawaii does not possess an original “long-form”, 1961 Certificate of Live Birth on file for Barack Obama, and therefore, Obama could not possibly have been born in the state of Hawaii. In the interview, Adams said, “There is no birth certificate – it’s like an open secret. There just isn’t one. Everyone in the government in Hawaii knows this.”

Adams managed the Absentee Ballot Office of the Honolulu County and City Elections Office. He served as the Senior Elections Supervising Clerk during the 2008 election and had access to vital records in his primary duty of verifying voters’ identities. Overseeing approximately 45 workers, it was his job to confirm the personal information of voters in collaboration with absentee balloting.

While serving in the Honolulu office of elections, Adams also checked with both major medical facilities in the city, Kapi’olani Medical Center and Queens Medical Center and was told by administrators of both hospitals that they possessed no medically verified record of Obama’s birth in their facilities, including any birth certificate signed by a doctor or hospital administrator.

Even to this date, no hospital in Hawaii, nor any agency within the government of the State of Hawaii has ever verified or confirmed possession of any original records documenting Obama’s 1961 birth there.

Adams discontinued his position with the Honolulu Office of Elections in September 2008 and now is an English professor at Western Kentucky University.

“I had direct access to the Social Security database, the national crime computer, states' driver’s license information, international passport information, basically just about anything you can imagine to get someone’s identity…I was informed by my boss that we did not have a birth record for Obama.” Adams said. 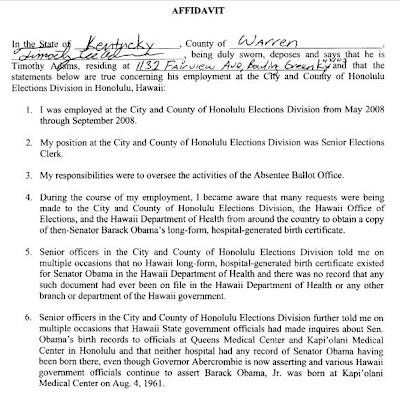 Two weeks later, in an interview with an ABC affiliated TV broadcast, Adams again said, "As of the time I was in Hawaii, working in the elections office, we had many people who were asking about the eligibility of Senator Obama to be president. I was told at the time there is no long-form birth record (an original birth certificate from 1961), which would have been the case if President Obama was born in a hospital in Honolulu. There is no such form in Hawaii."

Adams signed and had notarized the following sworn affidavit on Thursday: 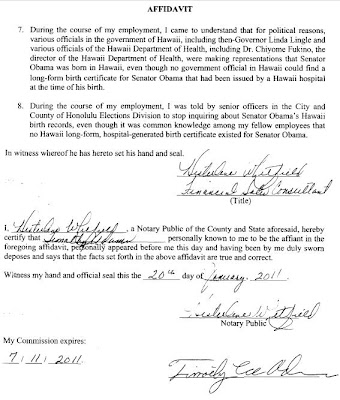 “Adams claims the Hawaii government was engaged in a cover-up designed to tell the American public through the Obama-supporting mainstream media that Obama was born in Hawaii, even though no long-form, hospital-generated birth certificate for Obama could be found on record in the Hawaii Department of Health.”

Hawaiian officials were able to legally justify these misrepresentations because Hawaiian administrative rules, under Hawaii's Revised Statutes, endow exclusive and autonomous authority to separate, but select, individuals to make decisions regarding the content, deadlines and procedures in issuing, authoring and validating vitals records. The laws are designed to, in essence, conveniently cancel another agencies voluntary capacity to cooperate with anyone making requests about Obama's records, including elections officials and even the Governor's office.
.
A conspiracy is defined as a secret effort or agreement by two or more people to commit a subversive or criminal act. Therefore, evidence suggests the State of Hawaii has engaged in a conspiracy based on carefully calculated legal deniability while isolating various officials behind mutually justified administrative secrecy and unaccountability. One official would simply deny personal knowledge while vouching for another official's legal justification for remaining silent or uncooperative with requests by Adams, Abercrombie, Schatz and the American people, for documented verification of Obama's legitimacy. Where one law indicates that Obama is not a Natural-born citizen, another law prevents any official from confirming it. Where one official of the State of Hawaii indicates that Obama is not a Natural born citizen, another official prevents the release of the information needed to prove it.
Ladies and gentlemen, it does not get more corrupt than this.
.
Adams’ affidavit, along with recent media statements from Governor Abercrombie, and the OCON attested by Schatz in 2008 present shocking contradictions to previous statements made in two formal press releases by the office of former Governor, Linda Lingle, and former Director of the Hawaiian Health Department, Dr. Chiyome Fukino, that they had personally seen Obama’s “original vital records”. On October 31, 2008 and, again, in July of 2009, Fukino explicitly stated that she had seen and personally verified that Obama’s records confirm that he was born in Hawaii. However, neither Lingle, nor Fukino have ever been subpoenaed, nor have they ever provided any other details about the records, leading many to conclude the State of Hawaii was, indeed, actively engaged in a politically motivated, “minimization” campaign to obscure the details of Obama’s past with ambiguity and misrepresentations.

"During the course of my employment, I came to understand that for political reasons, various officials in the government of Hawaii, including then-Governor Linda Lingle and various officials of the Hawaii Department of Health, including Dr. Chiyome Fukino, the director of the Hawaii Department of Health, were making representations that Senator Obama was born in Hawaii, even though no government official in Hawaii could find a long-form birth certificate for Senator Obama that had been issued by a Hawaii hospital at the time of his birth."

In the affidavit, Adams states that his supervisors told him to quit asking about Obama's birth records.

"I was told by senior officers in the City and County of Honolulu Elections Division to stop inquiring about Senator Obama's Hawaii birth records, even though it was common knowledge among my fellow employees that no Hawaii long-form, hospital-generated birth certificate existed for Senator Obama."

Adams conveyed to World Net Daily, "I can go get my long-form, hospital-generated birth certificate. And so I don't understand, this whole controversy should have been settled three or four years ago in about five minutes."

Adams has stated in the past that he discounts the validity of the “short form” version of the Hawaiian birth record commonly issued to applicants which is called a "Certification of Live Birth", the same document long attributed as the sole evidence used to proclaim Obama’s eligibility to occupy the White House. Until 2009, the Department of Hawaiian Homelands outright rejected this document as a primary form of identification for confirming native Hawaiian citizenship, let alone American natural born citizenship.

Many officials, including Adams, explicitly have said the short-form Certification of Live Birth is not an authoritative form of documentation proving that Obama was born in Hawaii.

"My basic assumption is that he wasn't born there," Adams continued in his interview with Dr. Corsi, "Certifications of Live Birth were given to people who were born at home, or to people who were born overseas and whose parents brought them back to the islands. If his parents were U.S. citizens, or if one parent was a U.S. citizen, as was the case with Obama, the family would apply for a Hawaiian birth certificate when the parents came back from overseas. That's normally how you would have gotten on [a Certification of Live Birth] in the 1960s."
Posted by Penbrook One at 9:24 PM