SHOCK AND ODD –Along with previous evidence proving the image of Obama’s alleged 1961 “Certificate of Live Birth” posted on the internet in April, 2011 was digitally fabricated, we reveal powerful new evidence which shows that data contained on the document contradicts Obama’s birth narrative and vital statistical accounting methods used at the alleged time of his birth. Vast disparities between the natal information appearing in the image and the standard methods used by federal and municipal governments to code, identify and report the contents of U.S. vital records prove that Obama’s alleged Hawaiian birth record was assembled to intentionally obscure the truth about his natal biography.

By Penbrook Johannson and Dan Crosby
of THE DAILY PEN

NEW YORK, NY – An intensive examination of the contents of Obama’s alleged 1961 “Certificate of Live Birth” image by the most respected experts in vital records accounting and identity investigation reveals that much of the contrived information about his alleged Hawaiian birth simply renders his Natural-born status impossible.

In cooperation with former members of the Social Security Administration’s Records and Claims Investigation office, along with information provided by the National Center for Health Statistics (NCHS), this installment of our report reveals evidence, for the first time, which shows the content of Obama’s document image was hastily and recently manufactured by criminal counterfeiters secretly working in collaboration with both the White House and the municipal government of the State of Hawaii.

Most importantly, the actual data found in the document image reveals that Obama’s natal history is in direct, and even absurd, conflict with historical precedents defining citizenry, demographics and birth metrics as well as protocols governing vital statistics accounting while exposing epic deceptions on a scale never before seen in American political history. 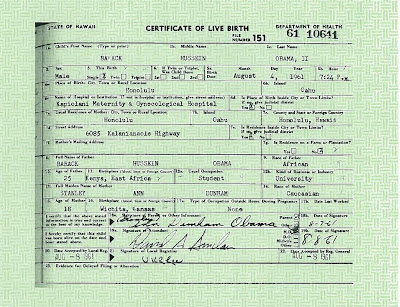 Aside from the contextual contradictions revealed by Obama's alleged 1961 birth records, it can never be dismissed that, according to centuries of legal and doctrinal precedence, the fact that Obama's father was never a U.S. citizen at the time of his birth forever disqualifies him from ever being eligible to hold the office of president unless the Constitution were to have been legally changed prior to his presidency.

A natural-born citizen is one born of geographic and biological circumstances, and to have remained under those citizenship metrics from birth to election, which make it impossible for any authority or public perception to consider him or her allied with any status other than naturally-born as a citizen of that nation.

Being born in a geographic location which is under the protection of the U.S. Constitution to two citizen parents are two of the three major components of natural-born citizenship according to historical authority defining the term. The third requirement of natural-born citizenship is continuity of that status without renouncement, voluntary or not, by expatriation, extradition or adoption to foreign parents.

These metrics were not made to hurt the feelings of those not qualified. They were intended to protect the sovereignty of the United States of America and its Constitutional rights through ensuring, to the highest possible degree, the allegiances of its executive powers. For, only the executive branch is led by one.

Failure to understand this is tantamount to willful ignorance and inferior understanding of the reason why America remains the greatest santuary of freedom and protection in world history.

The biggest misconception people have about birth certificates is that they always reveal the geographic location where the baby actually emerged from the mother's womb. This is not true. In most cases, the U.S. "Certificate of Live Birth" indicates the location and facility of "origination" of the certificate in conjunction with the first time a medical authority was able to verify birth metrics either through actually attending the birth, or by a first examination of the mother and child. Vital statistics reveal that 96% of birth certificates are originated in hospitals, but that a large number of those birth's did not actually occur in the hospital shown on the certificate.

The evolution of methods used to collect, prepare and report vital statistics must be carefully examined in order to understand how Obama exploited Hawaiian culture and its municipality to become America’s first ineligible president.

Vital statistics reporting methods fall under the jurisdiction of the U.S. Department of Health, Center for Disease Control, Census Bureau and multiple branch agencies in public health monitoring. This federal cacophony of bureaucracy works in collaboration with the state health municipalities in each state and U.S. territories to manage the nations vital records and statistics standards.

Vital records are implemented without concern for defining the citizenship status of the subjects on the vital records. Regulations governing the collection and reporting of vital statistics are purposed for improving accuracy, timeliness and availability of vital statistics data to be used for public health services, disease prevention and population.

Most certainly, vital records and statistics were never intended to be used as evidence for determining the eligibility of individuals to hold public office. The information contained in them does not provide an accurate portrayal of the specific natal circumstances, biographical events and geographic indicators required for determining Natural-born citizenry. Vital records simply are not qualified for making such determinations, but in the absence of other vetting resources and effort by authorities, they serve as a starting point for investigation.

Since some have chosen to elicit validation from the absurdity of internet images of alleged 50-year-old birth records, without so much as questioning their authenticity or origins, to determine a previously obscure politician’s eligibility to hold the most powerful and dangerous position in the world, they get what they deserve in their failure to demand a higher vetting standard.

Not only has the American public descended to new depths of endemic irrationality over Obama’s alleged birth records, the complex world of vital records and statistics has been breached to reveal some of the most bizarre protocols and complex logistics of any municipal service.

Tragically, so many remain willing to accept an ambiguous, uncorroborated image of an alleged document posted to the most corruptible and unreliable source of mythology in history, the internet, as the holy grail of some politician’s legitimacy to hold the greatest executive and military power on earth.

According to the 1961 Vital Statistics of the U.S. Report, Vol.1: Natality (VSUS Report), Hawaii’s 1961 birth statistics were tabulated by the National Vital Statistics office from microfilm copies of the certificates provided by the State of Hawaii’s main Vital Records office in Honolulu.

The records were organized by the main Hawaiian Vital Records office in order of “regional” sequence according to the alphabetical order of the five counties and two metropolitan areas in which the birth record was originated, not where the birth occurred. They were then assembled into “blocks” of 20 records and microfilmed.

Upon delivery to the NCHS, the data was transcribed by personnel and then manually “punched” onto cards prior to their insertion into a card-reader where the data was stored on magnetic tape in a 150+ digit string of code numbers for each record, each digit specifying a distinctive piece of data on the certificate accounting for birth metrics, demographics, age, location, parentage, health statistics, etc.

In successive years, according to the U.S. Vital Statistics System guide, beginning in 1962, the NCHS evolved to electronic data allowing each state to place the records on magnetic tape themselves as the preferred media for delivery of birth data. Computer processing and software media began to be used in the early 1980s.

In 1961, the NCHS stored birth statistics in “blocks” of 20 records on magnetic tape based on a 50-percent sample of even-numbered certificates only. This fact raises doubts about the authenticity of Obama’s alleged certificate given its alleged odd number and yet it contains preliminary codes scribed in the margins of the item entry spaces.

Many have asked why, if only even numbered certificates were tabulated, are these marks are also present on the odd-numbered certificate of Susan Nordyke, one of twins, allegedly born on August 5th after Obama. This is because the statistics for plural births must be accounted exclusively.

Notice the "X-X" notation in the "Plural Birth" entry on the image of Obama's alleged certificate, as opposed to the "1-2" (one of two) and 2-2 (two of two) on the Nordyke image. This indicates the entry code for non-plural birth.

According to NCHS protocols, tabulations were always taken from all certificates of plural births (twins, triplets etc.) because not all plural births are same-sex or even numbers of births. Therefore, natal statistics must be accounted for each birth of a plural event for statistical accuracy. Otherwise all twins, triplets, etc., would be accounted by the NCHS as the same-sex and if only even-numbered certificate of triplets are accounted using the factor (times two), the result would inaccurately indicate four births or two births, not three. (Odd birth + Even Birth + Odd Birth = two births based on the even-number sample x 2 factor or, even + odd + even = four births based on even-number sample x 2 factor). Therefore plural births are tabulated separately using a 100% certificate sample. 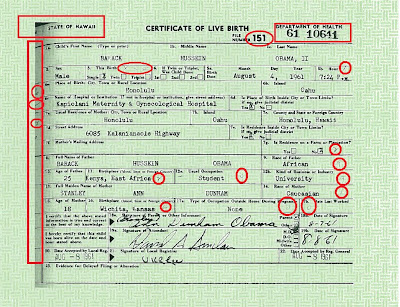 Pencil marks indicate Obama's certificate was prepared for coding and statistical tabulation.
Data found in the image of Obama’s alleged 1961 “Certificate of Live Birth” demonstrates the disparity between the documented evidence about his birth facts and the propaganda supporting his claim to natural-born citizenship as well as America’s first so-called "black" president.

According to the 1961 Vital Statistics Instruction Manual (VSIM) Obama’s alleged 1961 “Certificate of Live Birth” reveals that he is actually not America’s first “black” president. In fact, by vital statistics reporting standards, he is not even bi-racial. This is significant not to the issue of his race, but to the accuracy of the information on the image in comparison to his widely accepted birth narrative, in general.

Demographic coding of the information as it is stated on the image causes him to be classified as “white”, not “black”, contrary to what media propaganda has tried to convince us. Vital statistics reporting protocols state that a child’s race is classified by the race of the parents with consideration given in the following priority.

Race codes for reporting the mother’s and father’s race on the standard Certificate of Live Birth in 1961 were the same codes and were as follows:

Recall, Obama’s father’s race is shown as “African” which does not appear in the “Detail Race of Father” table as a classifiable race according the NCHS. It is coded as a number 9 which is “Not Stated”. Therefore Obama’s race is based on his mother’s, not his father’s, by federal law. We know the vital statistics of Obama’s father’s race was recorded using this code because within the margins of Obama’s alleged 1961 “Certificate of Live Birth” there are preliminary coding marks written in pencil as prescribed by the Vital Statistics Instruction Manual for 1961 reporting. Obama’s certificate has the number “9” scribed in the margin of the item for his father’s race.
Posted by Penbrook One at 11:34 AM