Despite propaganda generated to convince American voters that Obama is a natural-born citizen, the recently released document lauded by handlers and information manipulators remains unvettable due to its municipal origins, vanquished by the absence of an original 1961, Hospital generated “Certificate of Live Birth” which all Natural born presidential candidates would possess…all except one.

by Dan Crosby
of The Daily Pen

It is hard to imagine the American media could be this stupid.

Four years have passed since Barack Obama announced his candidacy for the Presidency and during that time he has never provided an original, 1961, hospital generated, standard version of a NVSD “Certificate of Live Birth” containing the signature of the Deputy Registrar of the State of Hawaii (not a local Registrar), and the name of an attending birthing physician with accompanying information about medical metrics of the birth.

However, Obama sure seems to rely on that little municipal agency way out there in the Pacific Ocean to provide whatever document, containing whatever label they decide to put on it that day, to perpetuate his epic deception.

Despite questions about its authenticity, the recent document issued by the Obama regime is a well dressed copy of a form of birth documentation created, once again, by the Hawaiian Department of Health, not a hospital, which is the same record commonly triggered by Hawaiian vital records laws upon the registration of births in that state, regardless of the location of the birth.

Officially, births can be registered in the state of Hawaii regardless if they actually occurred there when a doctor is able verify and sign an administratively originated "Certificate of Live Birth" from the Department of Health. The doctor does not have to be the actual birthing doctor. 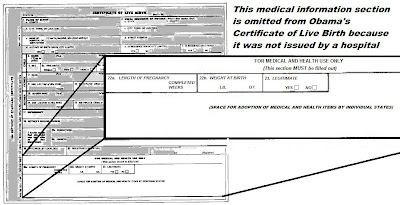 Official 1961 Certificate of Live Birth template created by the National Vital Statistics Division of the U.S. Department of Health. This form is declared by the Vital Statistics Report to be the "Standard Certificate" to be used by Hospitals in the United States. Notice the lower section pop-out which explicitly says "This section must be filled out". This section is used by hospitals to record the weight of the baby at birth, the duration of the pregnancy and if the birth is legitimate (occurring to married parents). It is also used by the local vital records office to record changes in the childs vital record status such as being adopted or a name change after birth. This section is not present on Obama's alleged long form Certificate of Live Birth because it was not issued by a hospital at the time of his birth. It was issued through an administrative process after a doctor examined him as a baby in the hospital named on the document.

Because of its historic indigenous population, "walk-in" registrations and permeable migratory culture, when a doctor examined the child in the 1960s and affirmed parentage and identity, that doctor became the attending physician of record in Hawaii, regardless if he or she was actually the birthing doctor. According to HRS 338 and 571, the term "attending physician" does not only mean one who attends the birth in Hawaii, it also applies to one with medical qualifications who examines and attests to the health of the child after birth.

According the Hawaii Revised Statute 338, the Department of Health was obligated to provide this very document to any applicant upon receiving evidence from the applicant that proved the birth parents to be residence of the state of Hawaii. HRS 338 also contains legal mandates which force the Director of Health in the state to issue “original birth certificates” to applicants under similar circumstances when the “adult or minor” applicant states that they do not have an original birth record from any other agency…regardless of the location of the birth.

A hospital has no such laws governing the way it issues a Certificate of Live Birth. This form of original birth certificate is issued under one condition. The baby being born in that hospital at the time and place indicated on the document.

The document image released on April 27th omits information from the lower region of the form which is available on a standard version of the 1961 “Certificate of Live Birth” describing amendments to the document, updates and birth metrics such as weight and length. This region is commonly used by the hospital identify any medical information pertaining to the parents as well as complications which may have arisen from the delivery. If the hospital does not use this section of the form for medical information, the state Department of Health will use it to record amendments, such as adoptions, name changes, parental identification and other notations related to the identity or status of the child.

However, the recent push to focus on the canards about Obama’s place of birth as stated in this wanton document image is yet another diversion from his failure to secure evidence proving he is eligible to hold the office of the presidency. While the liberal media desires to focus on Obama’s failures as a president, the American people continue to ask the most important preeminent question of all. Is Obama even eligible to be president in the first place? Perhaps the President would have never been a failure if it had never been Obama to begin with. That’s a lot to consider for the corrupted minds of the liberal establishment.

The most important document in this desolate saga is the 250-year-old blood-ransomed U.S. Constitution and, thus, the foundational doctrine of America’s vintage heritage, not some unverifiable, manufactured document from some stupid municipality way out in the ocean.
Vintage Americans should now understand by now, no matter what document Obama releases about his natal identity claiming to support his legitimacy as President, there are only two possible results which can ever occur. The document will either damage him politically or it will confirm that he is not eligible to be president.

First, Obama’s birthplace is irrelevant. His alleged father, as stated on the recently released “Certificate of Live Birth” registration, was never a U.S. citizen. Obama could have been born on the steps of the Lincoln Memorial and he would still not be eligible to be President.

On the other hand, if it turns out that Obama’s original parentage at conception is different than he has claimed it to be for the last three years, and the original document shows the previously un-amended version of his original “Certificate of Live Birth” confirming this, then he will be politically destroyed by his opponents for lying about his identity, rendering him un-electable.
However, let’s go ahead and discuss the “Certificate of Live Birth” document image posted on April 27th, 2011 to the internet, and confirmed as a long-form birth certificate by Obama himself.

It should be understood by all Americans that, regardless of its authenticity, the form document containing the recently released “Certificate of Live Birth” image, claimed by Obama to prove he was born in a Hawaiian hospital, was not provided by the originating source of his attested birthing witnesses from any hospital. Instead, the information and form of this particular publication were generated by the same agency which previously created the fraudulent, independently published Hawaiian “Certification of Live Birth” in 2008.

Recall in 2009, the mother of twins, Susan and Grethen Nordyke, requested and received two photostatic black copies of their original, August 5th 1961 “Certificates of Live Birth” which were produced and filed by personnel of Kapi’olani Hospital in Hawaii allegedly one day after Obama was born in that same facility. These copies contained five signatures, including the identities of four witnesses to the birth.

Yet, the fact that Obama would audaciously present yet another document created by the very same abetting agency which has notoriously concealed, corrupted and maligned every previous piece of information about Obama’s natal biography is, in a word…punishable.

Despite evidence strongly suggesting that the information provided in the recent image of a “Certificate of Live Birth” has been manipulated and, perhaps, forged, it is the fact that it even comes from the Hawaiian Department of Health is, in itself, the only reason needed to completely reject it as a counterfeit in its capacity to confirm Obama’s eligibility to be president.
Simply on its face, even if the document were assumed to be an authentic representation of Obama’s original, 1961 “Certificate of Live Birth”, the information contained within it was transcribed to the document image by the Department of Health, not the hospital named within it.

Unfortunately for Obama, the administrative procedures and Hawaiian vital records laws allows that state’s Health agency to create original birth certificates for births which do not occur in that state when the newborn child is examined post-delivery by a licensed Hawaiian physician and determined to be a child of parents who claimed Hawaii as their legal residence within a year of the birth, regardless of the location of the birth. The laws also allow the Hawaiian Health Department to name the hospital or facility where the examination takes place as the actual birthing location.