ELIGIBILITY AND JUSTICE ARE BLIND REGARDING OBAMA…AND RUBIO

NO HYPOCRISY: Until corrupt power brokers within the U.S. government are forced by the American people to engage the presidential eligibility question with maturity and responsibility to their sworn oath to protect the Constitution, more and more highly regarded candidates, like Marco Rubio, are going to find themselves embattled and undermined by doubts about their Constitutional legitimacy.

NEW YORK, NY - Marco Rubio, like Barack Obama, has been declared ineligible to hold the office of the U.S. Presidency or Vice President by the U.S. Constitution...and Senate Resolution 511.

In 2008, congress put itself in a no-win situation by inadequately defining "natural born" eligibility, for mere political expediency when, in an effort to distract attention away from Barack Obama's lack of eligibility, they haphazardly passed an eligibility resolution (SR 511) on behalf of John McCain, after reviewing historical documentation submitted by McCain, which declared him eligible for the 2008 Presidential election, despite his birth in Panama.

The resolution endowed McCain with non-legally binding, congressionally recognized, eligibility by virtue of his birth to two citizen parents while his father was serving in the U.S. military. A qualification which neither Rubio, nor Obama, currently meet.

Congress and the Judiciary have refused to address Obama's ineligibility in any way whatsoever.

Moreover, even more significant is that nearly 10 percent of the American people have said they will refuse to vote for any vice presidential candidate, and thus the presidential candidate, if that individual is not eligible by their definition of a natural born citizen. Fortunately for America, these constitutionalists are mostly conservative. Unfortunately for Republican politicians, this extrapolates to about 20% of the Republican party which will need those votes to oust the usurper Obama by an election process.

Without those critical votes, a Romney/Rubio GOP ticket will most certainly bring ALL republicans, not just the courageous, to suddenly care about the so-called "birther" movement and the legal process they have pursued in seeking a definitive declaration to the meaning of the term "natural born citizen". The risk of losing an election by default suddenly makes Obama's eligibility a matter for legal resolution, not political resolution.

Then again, the restoration of honor and truth begins with the honorable.

It's ironic how the threat of removing political power from politicians suddenly makes them scurry to the courts for a remedy. On the positive side, there will be millions of eligibility seekers ready to welcome them on the courthouse steps. Welcome to the party!

Republicans must understand that eligibility-conscious voters simply will not support Marco Rubio as a running mate, regardless of his popularity, unless change is made to the Constitution by a legal process. They will abstain from the next election as a matter of honor and principle to uphold the blood ransom paid for the Constitution. End of discussion.

Ergo, Barack Obama, already the unconstitutional incumbent, will be fraudulently elected again by default because his constituency has no honor for the Constitution anyway, causing what many political analysts have called an apocalyptic rebellion. 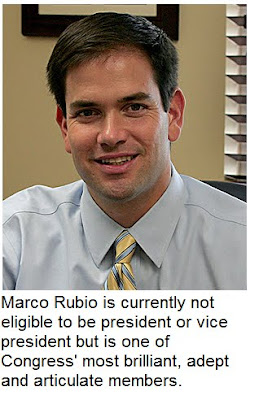 Regardless, those who have sworn to uphold the eligibility mandate for ALL presidential candidates will not participate in a fraudulent election wrought with deceivers, liars and ineligible candidates. They would rather take their chances in revolution than be served by an illegitimate government and shamed party affiliation.

Unable to endow Barack Obama with unanimous legitimacy over this same issue, the political species, and their American media letches, are being forced to understand that leadership eligibility, qualified by advanced human citizenship, can only be achieved when political candidates are measured equally by the same laws which apply to everyone under the Constitution.

Refusal to acknowledge this moral and legal deficit is breeding a contemptuous, but potently righteous, generation of extremely powerful and highly adept anti-governmental citizens. History has proven, time after time, that even the most powerful governments in the world have been defeated under the revolutionary power of vintage American heritage when they have strayed from the rule of law by the people, for the people.

As our current government continues to stray from its requisite purpose to uphold and protect the Constitution, it is drawing dangerously close to incitement of a meted resistance.

Whereas political interests and power lust will always push against the morality of our esteemed bureaucratic slew, forcing many of the inferior slag into criminality, the Constitution was brilliantly and purposely composed with divinely inspired language to be the inescapable silent authority which convicts their lawlessness.

The Constitution is forever correct...but amendable.

That being said, its time for someone to submit a multipartisan bill to amend the Constitution so exceptional leaders like Marco Rubio can run for president.

In the same unconstitutional posture by which Barack Obama was lauded by his misguided Democratic constituency, the willfully ignorant Republicans have their popularity contestant in Rubio. Rubio is one of the most well regarded members of Congress while Obama has served his liberal consensus as one of its most beloved radical change agents in American history.

Unfortunately, however, both men are currently constitutionally ineligible to hold the office of the president or vice president under Article II of the eligibility mandate.

Unfortunately for Obama, the Constitution was not revised on his behalf prior to his fraudulent election in 2008 rendering him America’s first unconstitutional president.

As reported by WND this week, the Florida Senator Rubio has been heavily favored as a potential Republican vice presidential candidate. However, a document recently found in the National Archives indicates that Rubio is actually constitutionally ineligible to serve as president or vice president.

It appears that Rubio’s father, Mario Rubio filed a Petition for Naturalization in September of 1975, confirming that Marco Rubio was around four years old when his parents became U.S. citizens.

Since Marco Rubio was born in Florida in 1971, four years prior to the filing of the Petition, this would mean that he was not born to two U.S. citizen parents as required under the legal definition of a “natural born citizen” to be eligible for the nation’s highest executive office.

In passing SR 511 for such despicable reasons as providing political cover for Obama, the Senate undermined the American electoral system and attempted to disregard the Constitution's requirement that a candidate must be born in the U.S. while acknowledging that it required birth to two U.S. citizen parents, a declaration which astonishingly and hypocritically disqualifies Barack Obama.

Therefore, declaring Rubio eligible by a similar resolution, like SR 511, would require Congress to undo its previous definition of eligibility by U.S. citizen parentage, as it applied for McCain, in order to endow place of birth on U.S. soil as the only eligibility requirement for Rubio, since his parents were not U.S. citizens at the time of his birth.

Such a despicable and blatently political hypocrisy would be the end game for an already highly unfavored congress whose disapproval rating is around 80 percent!

This same issue has undermined Barack Obama since before the 2008 election when his credentials and identity were first questioned by staunch Hillary Clinton PUMA supporters. Soon thereafter, multiple court challenges to Obama’s claims to presidential eligibility have ensued. Most have been unlawfully dismissed by a cowardice judicial system without consideration of the evidence because it is easier for foul purveyors in our legal system to ignore the greivances of the people than the violent usurpation of Constitutional power by the politically ambitious.

Obama claims to have been born in Hawaii in 1961, but the image of his alleged original Certificate of Live Birth which was posted on the White House in April 2011 has been determined by multiple document experts as well as a six-month law enforcement investigation to be a digitally fabricated counterfeit. The document shows multiple inconsistencies and anomalies, including extraneous graphic artifacts and misspellings which do not appear on any other Hawaiian vital record. Digital forensic analysis reveals a cut-and-paste composition from other document sources, as well.

Despite the forgery, however, if Obama could even document a Hawaii birth, he still would not qualify as a “natural born citizen” of the United States since he was not born of two U.S. citizen parents. Obama’s alleged father, as stated on the fake Certificate as well as documented worldwide in the press, was not a U.S. citizen at the time of Obama’s birth.

Compounding the controversy over modern interpretations over presidential eligibility is the fact that modern American society lacks the intellectual acuity to assign accurate meaning to the Constitutional term "natural born citizen" because most lack an understanding of our vintage American heritage and the blood ransom paid to obtain it.

The term "natural-born citizen" was such a common part of social and legal language of the 1700s it renders today's Americans ignorant to the fact that a clarification within the Constitution was seen by the more intellectually adept framers as unnecessary. For them, such a remedial explanation of the meaning of "natural born" would have been on par with demonstrating basic arithmetic to a mathematical genius.

A "naturally born" eligible presidential candidate is one who is born in a geographic location (U.S. soil) under the protection of the U.S. Constitution to TWO U.S. citizen parents without any interruption of their natural-born citizenship status occurring between birth and election.